I saw an advert on Facebook for Ultra Ballroom where you learn to Ballroom Dance for Cancer Research, swayed by the free lessons, I signed Jon and I up and dragged him along to the first meeting.

The initial meeting was at Walsall Football club. They explained that we would be given 2 lessons a week for 8 weeks and then we would have to dance at a ” glamorous black tie event to showcase your skills in front of a huge crowd of 500 people”. 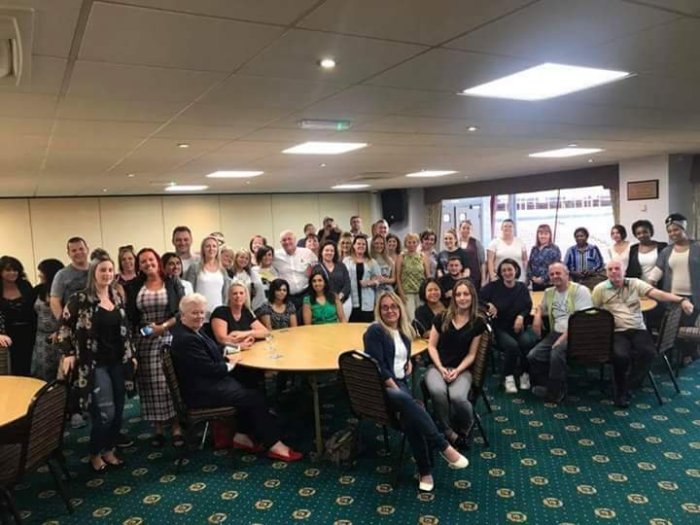 Luckily there was a bar so after a pint, Jon thought it would be a good idea to sign up. Everyone seemed lovely and it sounded like a laugh.

As the beer wore off we became more uncertain about whether we fancied dancing in front of 500 people especially considering our only dance experience is Jon head-banging and my flailing about like a drunken fairy in dodgy rock clubs. We decided to give it a week of classes and see how it went before we committing to it.

The classes are at Studio 1 in Walsall. Its a beautiful venue

We met Ryan in our first class who is our teacher. He explained we would be learning two dances, Ballroom and Jive over the 8 weeks and we would decide which one we would want to do. We started off with the Ballroom dancing and we both giggled all the way through it, making faces at each other as we span around the wrong way.

Jive was a different beast, its like aerobics with a wiggle. Before Roller Derby I use to go to Fast Blast aerobics, which is basically aerobics to trance music so I could kind of keep up. Unfortunately Jon hadn’t spent his early 20s in lyrca so struggled with moves like drunken sailor, so after the class we practiced in the garden until he’d got it.

We had a bit of a practice in the living room before the second class and we could actually do the things in class! Unfortunately we then had to learn some more and we went back to being rubbish again. However the success of the first bit made me think we could actually do it.

I didn’t want to start raising money or selling tickets until we had decided to go through with it. Jon wasn’t keen on dancing in front of people but after the second class he said we could go ahead if I wanted to do it. Which is kind of like he really wants to do it too.

So now we have a Facebook event and a Just Giving page so no backing out now.

If you’d like to come watch, tickets are £20 can be bought here: