Looking at the above graph, how did you think pink did? Pretty damn badly? Right!

I went Go Karting with my brother, Ricky and my friend Frizzo. We had the briefing about not treating it like bumper cars and not being a dick which I dont think my brother or me properly paid attention too.

The bald guys had to put their hair nets on and we got in our karts. They were petrol karts and went really fast. Eventually i had my foot to the floor and was working out my driving lines as i wizzed around the course bashing into the tyres when i misjudged it. It was super fun over taking people and chasing them when they over took you. After the first 15 minutes I was having a great time if abit sore.

We got out of the karts and we were given our print outs. Thats when i saw the graph. My fastest lap was only 1 second slower but that graph made me look like i was a Sunday driver. I was pissed off! Stupid bloody graph! Im not going to lie this made me act like abit of a dick.

In my next 15 minutes i took Frizzo out and when Ricky tried to over take me id take the inside and stop him passing. I decided to try a new move of slowing down in from of him which led to a massive crash and the source of my ongoing neck pain. After crashing full speed into the tyres i decided to calm down abit and took some leisurely laps before coming into the pits.

We had 30 minutes of driving and we’d decided to break it into 2 sections of 15 minutes each. We were the last group for the day and all got on the fastest laps board which was nice however i am still raging about the stupid graph! 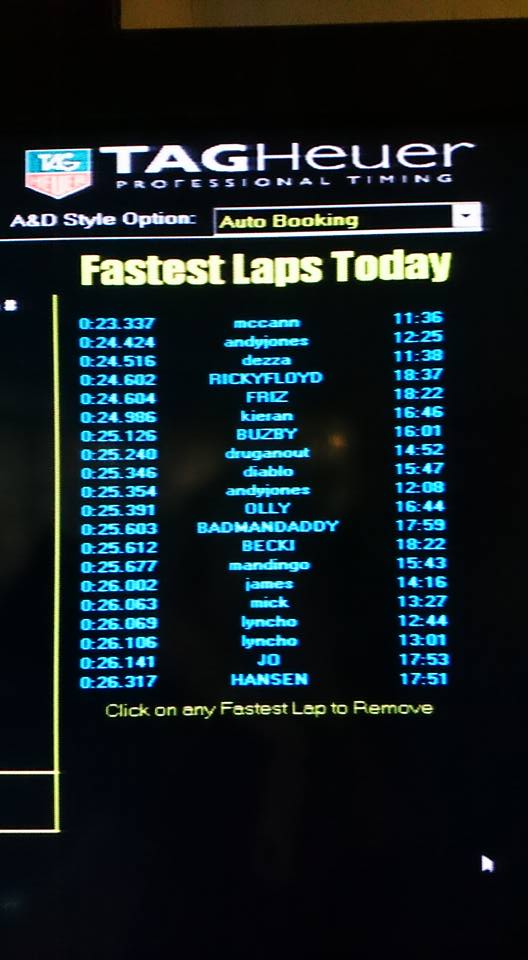 Fun – The first 15 minutes were pretty fun but after I saw that graph I was raging! Also not sure it was worth the neck pain the next day.

Value for money – Ricky and I were using a Groupon voucher which was 2 for £20 whereas Frizzo had paid usual price of £27 for half an hour. For that sort of money you’d be better off paying abit more for the grand Prix option, which is a lot more fun and you are less likely to cripple your back as you only do 5 laps at a time.

Join-ability – Frizzo managed to book the same day and you could easily turn up on your own. However much more fun to lap your friends.

Spam-ability – I’d go again but only to do the Grand Prix with friends. The straight driving is not something I’d really recommend to others unless they wanted to practice for the Grand Prix.

Total of 8/20 – This is based on just driving straight for 2 lots of 15 minutes. The Grand Prix option is much better and if you do, do that I’d recommend printing out masks from the characters from Mario so you know who you’re passing.