I’m a member of several meetup groups and saw that there was a free comedy improvisation night event on the Go: Heart of England meetup group. As my car insurance is due I figured a free event was in my price range.

The night was ran by the Box of Frogs at the Blue Orange theatre in the Jewellery Quarter.

I arrived alone about 7.20 and got a drink. While waiting to go in I was offered a seat in the cafe by a lovely couple who chatted to me about other events at the theatre and completed the slips with questions on to answer.

We went into the theatre and about 50 people had turned up. With about 20 empty seats so a good crowd with room for more. 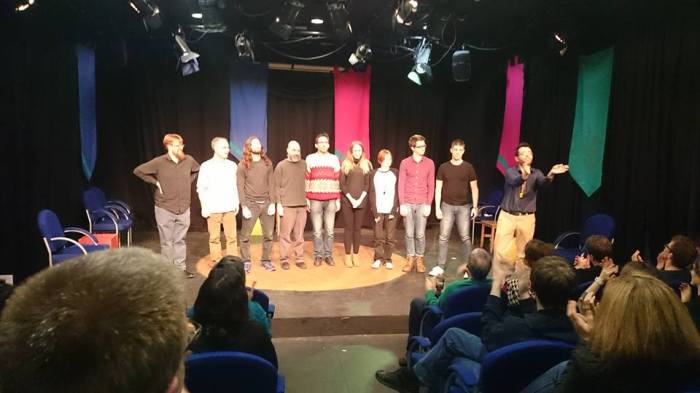 Box of Frogs was hosted by JP who was an excellent front man, he got the audience involved from the get go by asking us to shout out random words to questions he asked. No one was forced to join in if they didn’t want to.

He introduced the other comedians which included my friend Jay Handley, he runs the excellent free comedy night Fat Penguin which is always a great night.

JP would explain what the “game” would involve and say which of the improvisers would be taking part.

The games would involve setting a scene with suggestions from the audience and the improvisers acted out the scene trying to keep to the rules.

They improvised lots of different scenes including one with talking penguins that had me in stitches.

At the end the audience were asked for a suggestion to start and end a story. They took my end suggestion which was “and they all died in a fire”. My standard comedy heckle.

Overall i had a really good night and lots of laughs.

Fun – Compared to a usual comedy night this was riskier as due to the nature of improv it’s all unscripted so they can’t test the jokes out on their friends. This meant that some bits were a bit strange but overall i was so impressed at how fast these comedians brains worked. The other thing that was lovely to see was the reactions of the other comedians that were not involved in the game, they were in stitches and seemed like a great group of people.

Value for money –Pay what you can, they even wrote a song about it. Free Show Blues.

Join-ability – You don’t need to book, just turn up. You can join in by shouting out or writing down suggestions but you don’t ever get picked on. I went on my own and had no problems. It is only on the 3rd Monday of every month so if you aren’t free on that Monday you will miss out.

Spam-ability – It’s not something that i would go to every show but id happily go again if i was free on a Monday.

For more information about Box of Frogs: https://boxoffrogsimpro.wordpress.com/performances/toadally-free-shows/

One thought on “Box of Frogs”