Balsall Heath WI was putting on a Sound Bath as their first event of the year. They described it as “A ‘Sound Bath’ is an opportunity for you to totally relax, to forget the world for a time and be ‘bathed’ in sound. This is a passive group sound healing session using Himalayan & quartz singing bowls, gongs & percussion.

You will need to bring with you a yoga mat/camping mat/sleeping mat, a pillow and a blanket of sorts to stay warm! All that is required of you is that you rest on the floor or in a chair; the therapeutic sound will do the rest”

That sounded suitably weird so it inspired me to get out of bed on a Sunday and go give it a try. I have tried meditation before and usually feel quite euphoric afterwards so I was interested in trying something different.

I arrived and found a huge number of women, over 50 crammed into a hall. I loved that they gave everyone name stickers so it made chatting to everyone easier. I don’t think they were expecting such a lot of people as there wasn’t enough seats for everyone. However I noticed the women that were running it gave up their seats for newer people.

Luckily i had bagsied a seat earlier and took my cup of tea and lemon drizzle cake and sat by Hannah who chatted away to me about the WI while we waited for the first part to start.

Before the Sound Bath the WI had arranged a talk about mental health awareness and self care. Rebecca who gave the talk spoke very well and had the loveliest outfit on. I think the most important bit of the talk was reminding people that 1 in 4 people have a mental health issue so you are not alone and if you do need some help try and be brave enough to speak to someone about it. 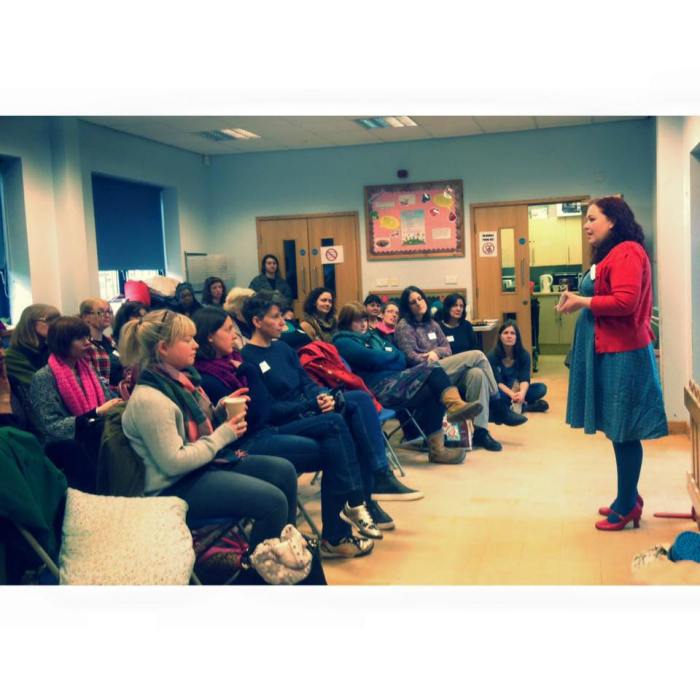 After the talk we moved all the chairs and I got my bed out. Due to the amount of people I wasn’t fully able to lie down but i was cosy under my blanket.

The lady called Soesan Edan came from the Musery, she explained that Sound Therapy has been used to help people for many years. More information can be found out about it here: http://themusery.co.uk/sound-therapy/

She told us to close our eyes and take some deep breaths and then began playing the different instruments.

At first it was quite novel and the sounds were pretty but as we hadn’t done any guided breathing exercises before we started I found that that I kept getting distracted and ending up having an internal chat with myself about what was going on. This is actually quite a rare thing for me as my brain is usually quiet as i rarely sit long still enough to think deeply about much of anything.

After about 30 minutes I got bored of myself and decided to peek to see what was happening. Soesan was walking around shaking pretty instruments and hitting a big gong. This made it have a surround sound feel. Every time she came near me i closed my eyes again and pretended i was doing it properly. The people around me seemed pretty peaceful and although there was an odd cough or shuffle it was amazing to keep over 50 people silent for 45 minutes. 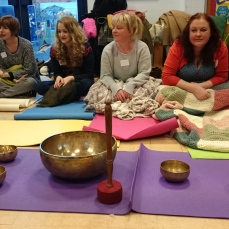 Afterwards we all sat up and did a Q + A and got to see how the instruments worked which was enjoyable. One lady said she thought it was amazing and felt like she was under the ocean. A lot of people seemed really keen to do it again and found out about the other classes she runs. Details can be found here: http://themusery.co.uk/booking/

To be honest I think I ruined it for myself as rather than concentrating on my breathing I started to talk to myself so I never got into the right frame of mind for it.

Overall i had a lovely day with the Balsall Heath WI. They are a very friendly bunch who have so much stuff going on in the next year I am sure I will go back. Regarding the Sound Bath I think if you are able to pay attention and have a good imagination I think this would be really fun to try.  However I think I will stick with guided meditation classes in the future.

Fun – Personally this isn’t something for me as it involved too much staying still and being quiet.

Value for money – This 45 minute class was 5 pounds plus a donation for tea and cake. Usually would cost more but discounted by WI.

Join-ability – The WI had advertised it so well and kept the cost down so it was really easy to join in. It was the first event i have actually gone to on my own since starting this blog. Everyone made me feel really welcome.

The downside was that they had done such a good job of being welcoming that too many people had turned up so  not everyone could lie down.

Spam-ability – If I was ranking the WI they would get top marks as they are a really lovely group of people. Regarding the Sound Bath,  I will tell some of my friends who already meditate about it i don’t think it would have mass appeal and i don’t think I would do it again.

Information about the Balsall Heath WI can be found here: